You know, the British gastroenterologist who’s credited/blamed with linking vaccines and autism to millions of parents and thereby single-handedly birthing the modern anti-vaccine movement.

Andy inspires… hyperbole. Mention his name and it’s likely to provoke a fight. In a 2015 New York Times article: he was alternately described as “one of the most reviled doctors of his generation” and “Nelson Mandela and Jesus Christ rolled into one.”

I mean, Mengele or Mandela… seriously?

There’s gotta be more than meets the eye here, right?

We live in Tabloid Nation, after all, where paparazzi roam free and no one is immune. Why hasn’t someone been curious enough to take a closer look?

Who is Andrew Wakefield really? And he’s a family man? How could any family survive this kind of circus? What do his wife and kids make of all this?

Miranda Bailey is a mom and a smart cookie. She’s a Hollywood actress who’s drawn to great, revelatory stories. Stories that teach us a little bit more about who we are. She also happens to be a very good filmmaker.

Miranda wanted to know. She contacted me when she started doing research on the MMR vaccine scandal and we became friends.

“Louise, can you introduce me to Andrew?”

This was almost 10 years ago. Miranda has been making her “Wakefield doc” for a while now. I don’t want to think about the number of times she rued the day she met me (and Andy).

Like most good things, this movie took time. Miranda spent weeks following Andy all over the country and in Austin, TX with the Wakefield family. The storyline evolved real time multiple times as she filmed and filmed. And edited and edited. It was almost done when Tribeca happened. It’s a testament to her stubbornness.

I saw an early version last year and the final version in April, so I can tell you what you need to know.

No matter how you feel about vaccines or autism or Andrew Wakefield, this film is for you. It’s a character portrait so intimate that you can’t look away.

It raises all sorts of questions that you get to ask and answer in the privacy of your own mind because attending this movie is not a statement of anything. Except the virtues of curiosity. And an appreciation for the genre of documentary filmmaking.

The Pathological Optimist is not a pro-vaccine take-down or an anti-vaccine anthem.

It stands squarely in that narrow sliver of real estate that dares to present an exceptionally controversial person without taking a position. It asks the question — who is this man? — and respects you enough to leave you alone to wrestle with it.

ps. Buy tickets now. It’s going to sell out and you’re going to want to watch.

Miranda Bailey is a passionate producer, actor, and director known for bringing a diversity of strong, well-crafted stories to the screen. Miranda has delivered 20 films over 15 years, including the Oscar-nominated THE SQUID AND THE WHALE; the Spirit Award-winning THE DIARY OF A TEENAGE GIRL; James Gunn’s SUPER; the Sundance hit SWISS ARMY MAN; and the critically acclaimed NORMAN. She has directed two documentaries: GREENLIT, which premiered at SXSW and is available on iTunes, Amazon, and Hulu; and now THE PATHOLOGICAL OPTIMIST opens September 29 at the Angelika Film Center in NYC and can be seen on VOD November 14. Read more about Miranda here. 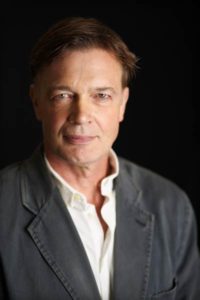 Andrew Wakefield MB.BS. is a co-founder of the Autism Media Channel and director of the film VAXXED. An academic gastroenterologist, Andy received his medical degree from St. Mary’s Hospital Medical School, London in 1981. He qualified as Fellow of the Royal College of Surgeons in 1985 and trained as a gastrointestinal surgeon with a particular interest in inflammatory bowel disease. He was awarded a Wellcome Trust Traveling Fellowship to study small-intestinal transplantation in Toronto. He was made a Fellow of the Royal College of Pathologists in the U.K. in 2001. Andy has published over 140 original scientific papers, reviews, and book chapters.

Louise Kuo Habakus is the founding director of Fearless Parent™. She is a bestselling author; runs two non-profits, Center for Personal Rights and Health Freedom Action; lectures widely; and has appeared in numerous media outlets, including ABC World News Tonight, Fox & Friends, and The New York Times. Louise was a Bain consultant and a C-level executive in the financial services industry. She holds two degrees from Stanford University. Louise serves as an advisor to Focus for Health Foundation, GreenMedInfo, The Documenting Hope Project, and SHE Living TV. She is a certified KRI Kundalini Yoga teacher and the mother of two.