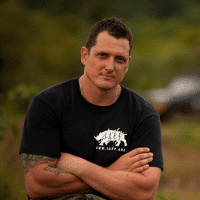 Damien has lived an extraordinary life for a 37 year old. At 19, as a garbage collector in Melbourne he joined the Australian Defence Force, graduating through one of the most arduous courses as a RAN clearance diver. With the ADF’s counterterrorism restructure following 9-11, Damien joined the elite TAG-East force, training as a sniper. Later as a private contractor he deployed to Iraq where he project managed the Iraq Special Police Training Academy overseeing training and deployment of local troops. After three years in Iraq, he left the front lines with no direction in life. A trip to Africa in 2009 awakened him to the horrors the natural world is facing from poaching. Recognizing the unique skills he possessed by virtue of his training and experience in military roles, Damien liquidated his savings, and founded the International Anti- Poaching Foundation (IAPF). Now a multinational not-for-profit, the IAPF runs operations on the front lines of the world wildlife wars, protecting iconic endangered species from slaughter by poachers. Using battle- proven tactics, training and technology in what is effectively a counterinsurgency operation the IAPF has recently demonstrated striking success in Mozambique. Operating in the most critical area on earth for rhino protection, losses have been reduced by over 80%.