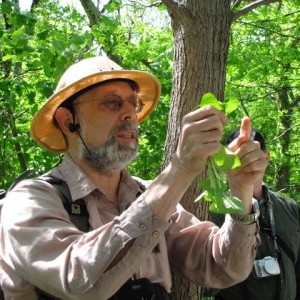 Naturalist-Author “Wildman” Steve Brill has been leading foraging tours in parks throughout the Greater NY area since 1982, for the public, for schools, libraries, parks departments, day camps, scouting groups, teaching farms, museums, environmental organizations, and more. His Identifying and Harvesting Edible and Medicinal Plants in Wild (and Not-So-Wild) Places (William Morrow Publishers, 1994) is considered a classic on the subject. His innovative Wild Vegetarian Cookbook (Harvard Common Press, April, 2002) is changing the way people think of preparing gourmet food. His Shoots and Greens of Early Spring in Northeastern North America (self-published, 1986 and 2008) teaches people how the foraging season begins, and his Foraging NY covers the best plants of New York. His Foraging With the “Wildman” DVD series is showing people how it’s all done, and his Wild Edibles Forage app includes everything he knows about edible/medicinal wild plants. But he’s still best known for having been handcuffed and arrested by undercover park rangers for eating a dandelion in Central Park! To learn more, visit www.wildmanstevebrill.com. 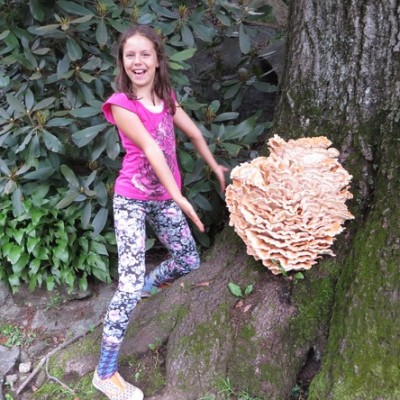 Violet Brill is a 13-year-old naturalist. A self-taught expert on birds, she’s been co-leading half my public tours, and many private tours (schools, scouts, doctors, museums, day camps, teaching farms, birthday parties, herbalists, artists, etc.) since she was 9. The photo is of her with a 30-lb. chicken mushroom she spotted from a moving car when she was 10. 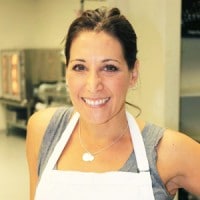 Celine Ikeler is the Karma Baker. A mother, artist, and foodie with a daily meditation practice, Celine has refined a new style of baking. She is transforming organic plant-based and gluten free ingredients into extraordinary baked goods for everyone. While she’s immersed in serving up desserts such as Karma Cakes, brownies, Karma Sandwich cookies, Cake Pops, layered cakes, donuts, pies, tarts, cheesecake, muffins, rolls, baguettes and bread loaves…it is her custom made Organic Gluten-Free Baking Flour Mix that puts the magic in all of it. A proprietary blend of vegan flours, Celine was in need of a gluten-free flour that was bean-free. After years of trial and error she magically perfected a recipe which was not only bean and nut-free, but also enhanced her overall vegan baking.

At Karma Baker in Westlake Village, California, Celine and her husband Arek share a philosophy with their employees of Enlightened Baking™ -the intention of one’s heart and mind becoming infused with food as its made. The vibration of the kitchen is high and essential to the manner in which the Karma Baker team works together and supports one another. Sharing ideas is highly encouraged with a loving kindness at every turn. The Karma Baker mission is to change the way vegan & gluten-free baking and cooking are perceived. Through baking Celine and her team want to erase stereotypes and create corrective experiences for everyone. Baking has been a lifelong solace for Celine. At age twelve, it started with boxed brownies until she worked her way up to making chocolate chip cookies from scratch. This creative (and yummy) outlet became something Celine loves to share to this day.

In 2005, she began her journey into the world of vegan baking (no eggs, wheat, butter or cream) when her neighbor’s daughter, Sofia, was unable to eat dessert due to severe dietary restriction. This felt unacceptable to Celine so she became determined to make something edible and sweet that this little girl could enjoy along with everyone else. The end result was a delicious garbanzo bean brownie that became a huge hit. In fact, Celine continued to bake for Sofia and her family and eventually discovered her own list of mild allergies to gluten, wheat, dairy and eggs. It was during this time Celine shifted becoming acutely aware of her own karmic footprint (when a person consumes animal products, their karma is affected) and as a result, chose an animal free diet. Being plant-based, inspires and moves Celine to show the world there is another way to partake in life’s pleasures of good food and delectable desserts. Karma Baker is meant to be enjoyed and she’s letting everyone know – one (gluten-free/vegan) cupcake at a time. Celine lives in Agoura Hills with her husband/business partner Arek, their four children and pet dogs and cats. She enjoys meditating, working out, hiking, backpacking, spending time with her family, creating new recipes and living a vegan lifestyle.