Part I: Amber Bodily, Holistic Health: Start at the Feet 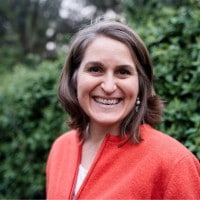 Amber Bodily is a natural health practitioner who has helped 100s of thousands of people regain their health and well-being.  She is a Master Footzonology practitioner and instructor, Master Herbologist and Master Aromatherapist. She also writes a popular column on natural ways to boost your health and overcome everyday health issues for MindBodyGreen, Thrive [and Huffington Post] and is the Health Editor and contributor for Fulfillmentdaily.com. She also has a keen intuitive ability to discern her clients’ health concerns. Amber, who holds an undergraduate degree from the University of Hawaii in design, was busy running 3 successful businesses when her first two children were born. She originally had no intention of going into the field of natural health. However, when her childrens’ health became severely impaired she began to research and delve into natural forms of healing including foot zoning, herbs and aromatherapy. After the successful recovery of her first child from a respiratory infection so severe that he nearly died, and of her second child born with large brain tumors, Amber realized that she needed to share the health information she had learned with others. Amber’s services are in such great demand (with clients traveling from all over the world including China and India) that she now trains others in the healing modalities she has learned, and has a large and devoted following among her clients and trainees. She both trains people to learn Footzoning (including foot zoning, back zoning and face zoning) and also holds community health classes including Children’s Health, Men’s Health and Women’s Health. Thanks to the methods she uses, she has seen children reverse hemophilia, “infertile” women get pregnant, and people reverse autoimmune disorder and Lime symptoms. When she’s not seeing clients or caring for her three boys, she is a triathlete and triathlon coach who surprises triathletes by showing them how a plant-based diet can drastically improve their performance. Her story has been told in the press in Psychology Today and MindBodyGreen.

Part II: Dr. Ian McDonald, The Vegan Option
Ian McDonald is a BBC-trained radio producer who started The Vegan Option because he wanted to do baketivism for the brain – really interesting radio that just happened to be vegan. He’s taking sabbatical from paid employment to record interviews with world-leading experts, pore over esoteric research in the British Library, and travel to the places where the story unfolded – including the length and breadth of India – to bring the story to listeners. The UK’s leading art radio station, Resonance FM, broadcasts “Vegetarianism: The Story So Far” on the first Tuesday of each month. This 15 part story is approaching its conclusion, to be broadcast on June 6, 2017. You can discover The Vegan Option, including Vegetarianism: The Story So Far, at http://theVeganOption.org/.