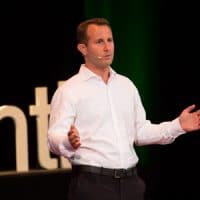 Paul Shapiro is the author of Clean Meat: How Growing Meat Without Animals Will Revolutionize Dinner and the World(published by Simon & Schuster’s Gallery Books). A TEDx speaker and the founder of Compassion Over Killing, for 13 years Shapiro also served as a spokesperson and vice president for The Humane Society of the United States.

Shapiro is a mainstream voice for agricultural sustainability who’s earned praise from many sides of the animal welfare spectrum. For example, Peter Singer, author of Animal Liberation, calls him “a major force in the struggle to reduce farm animal suffering,” while a McDonald’s executive inducted Shapiro into his own NGO Hall of Fame. He wrote: “The common thread of the effective NGO leader is ‘likeability.’ …What’s most common and effective in their work was their good nature and fun spirit. Paul Shapiro from the Humane Society of the United States exemplifies this. Even though we don’t agree on a fair amount, but because he’s affable — and no jerk! — we found common ground, getting rid of gestation stalls for sows and going cage-free for hens.”

In 1995, Shapiro founded Compassion Over Killing as a high school club, building it into a national organization over the next decade before leaving in 2005 to join The Humane Society of the United States. An inductee into the Animal Rights Hall of Fame, Shapiro has been interviewed by hundreds of news outlets as an authority on animal welfare and animal advocacy. He’s also published dozens of articles about animal welfare in publications ranging from daily newspapers to academic journals.