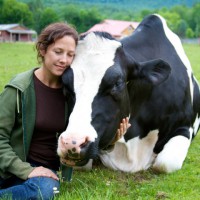 Jenny Brown is a longtime animal rights activist and Co-Founder of Woodstock Farm Sanctuary in High Falls, NY–one the country’s most recognized and respected sanctuaries for farmed animals. She previously worked in film and television until when she went undercover in Texas to film farmed animal abuse. That experience led her to dedicate her life to helping farm animals and raise awareness of their plight. Jenny’s story and the work of her sanctuary has been featured in the New York Times,Cosmopolitan, Rolling Stone, New York Magazine, NPR’s The Diane Rehm Show and more. She is the author of The Lucky Ones: My Passionate Fight For Farm Animals. You can read more about her and the sanctuarywww.WoodstockSanctuary.org.