Caryn discusses some of the questions that came up during last week’s Food Revolution Summit, including concerns about canola oil. She goes into detail about the garbanzo bean regarding its versatility as a whole food, as a flour and now as aquafaba. 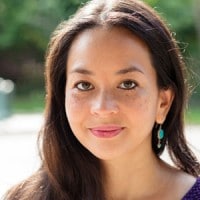 Leinana Two Moons is the author of the blog Vegan Good Things. Her writing and photography have appeared in LAIKA and VegNews magazines. A longtime vegan, she is dedicated to creating recipes that are satisfying enough to please anyone, vegan, vegetarian, flexitarian, or hardcore carnivore alike. She is active in the NYC vegan community and lives in Long Island City, NY with her husband and two children, who are all vegan. Baconish is her first cookbook.