Marijuana is dramatically gaining acceptance among the American public. Recently, a new poll by Gallup revealed that the percentage of American adults who smoke marijuana has nearly doubled in three years. According to the Gallup poll published in August 2016, among the American adults who participated in the survey, one in eight – representing 13% of the respondents used in the poll – reported current marijuana use. In 2013, the same Gallup poll revealed that 7% of American adults smoke marijuana. This means the figure nearly doubled within the last three years, since the first study was conducted.

According to marijuana activists, the surge in the use of the plant in the United States is highly influenced by public knowledge that the plant has a medicinal value. Currently in the United States, 24 out of the 50 states have legalized medical marijuana. Others are also pushing for the plant to be legalized for the same purpose. In November this year, some states will be voting to make changes to their marijuana laws, despite the federal ban on the plant. Recently, the State of Washington announced that it will defy federal law by issuing licenses to laboratories in the state to grow the plant for scientific study.

As these positive developments on marijuana are happening across the United States, a new study conducted by two researchers from the University of Georgia has shed more light on the medicinal and economic benefits of the plant, adding to the positive scores for marijuana advocates.

The study, published in the journal Health Affairs, revealed that legalizing marijuana for medicinal purposes has helped the United States save $165.2 million in medical care costs in 2013 alone.

The researchers said they looked at over 87 million prescriptions from the Medicare Part D database enrollees from 2010 to 2013, focusing on conditions where marijuana might serve as an alternative treatment. Conditions where marijuana could serve as an alternative were identified by the researchers as anxiety, depression, glaucoma, nausea, pain, psychosis, seizures, sleep disorders and spasticity. 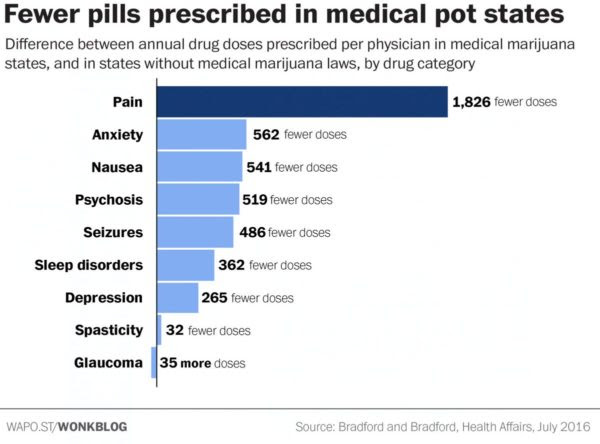 The researchers confirmed that the availability of medical marijuana has a significant effect on prescribing patterns and spending in Medicare Part D.

Co-author of the study, David Bradford told University of Georgia Today that because medical marijuana is such a hot-button issue, the findings can give policymakers and others another tool to evaluate the pros and cons of medical marijuana legalization. He also added that people are not just using marijuana for fun in the United States.

“We realized this question was an important one that nobody had yet attacked. The results suggest people are really using marijuana as medicine and not just using it for recreational purposes,” he said.

According to federal law, marijuana is classified as a Schedule 1 under the Controlled Substances Act. The federal government holds that marijuana has high abuse potential, no medical use and severe safety concerns. However, many states disagree with this assessment. In 1996, California became the first state in the United States to legalize marijuana for medical purposes. Alaska, Oregon and Washington followed in 1998. In June 2016, two states, Pennsylvania and Ohio passed laws allowing for medical use of marijuana.